Seven Day Vending in Tucson, Arizona saw sales slump during the recession that began in 2008, and determined to add cashless payment capability to its machines. “We wanted to source our card readers from one supplier,” the Tucson operator explained. “I wanted to find a partner who offered ‘futurability,’ and I chose MEI.” That decision made, owner Richard Royer evaluated gateway providers. MEI described the leading gateway providers and summarized their solutions for cashless vending. After studying the options, Royer chose Apriva because of its emphasis on security, based in part on its long experience with secure communication for government clients, and the flexibility of its vending applications.

One immediate benefit Seven Day got from its alliance with Apriva is the Driver Bookmark Card. While discussing the nuts and bolts of cashless implementation with Apriva, Royer explained that his VMS cannot import data directly from external sources like payment processors or hand-held DEX-capable devices, and asked whether there is an effective solution to totaling cash and cashless sales between machine visits in order to reconcile sales with withdrawals from inventory. “The Apriva Bookmark Card looks just like a credit card; it is carried by all our drivers,” Royer said. “The driver swipes the card during a visit, just as a customer would when making a purchase; and it allows me to pull up and generate a report that reconciles the card sales right up to the exact time the driver serviced the machine. The card gives me a ‘bookmark’ in the data, so I know exactly when a driver serviced a machine.  While we don’t use DEX handhelds, Apriva provides us the same accurate information via their backoffice,” Apriva PartnerStudio.

This has proven to be an economical, efficient solution. 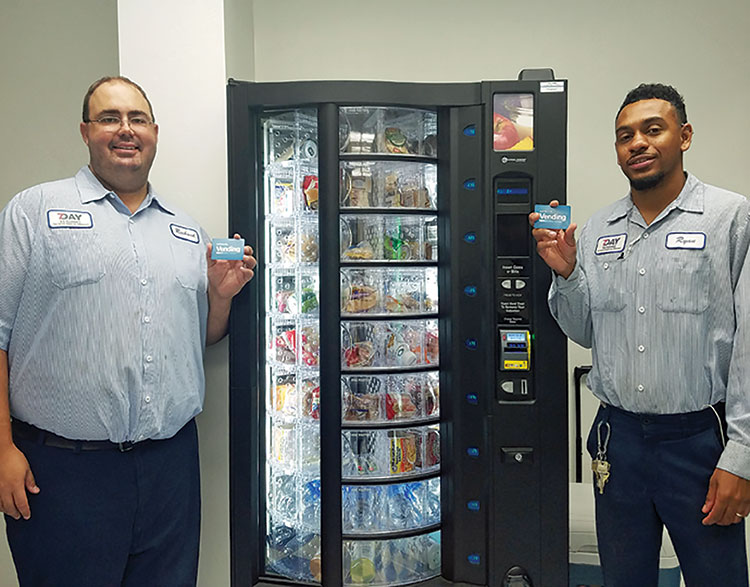 “Cashless has given us a sales lift,” Royer reported. This primarily is attributable to patrons’ demonstrated preference for paying with their credit cards. On average, 70% of sales made through cashless-capable machines are made with cards; even patrons in the lowest-volume locations do 50% of their purchasing with cards.

As public preference has shifted toward cashless sales, the classic vending concern with pricing has become less critical. Seven Day Vending has implemented pricing by category, with three or four categories in each machine. “For example, all our candy might be priced at $1.25,” Royer instanced. “This gives the driver flexibility in changing items to accommodate location requests.” Vending patrons today also are receptive to higher-priced items, he added. “People will pay for what they want, and they want a product – not a price,” he said. This enables the operator to offer a wider variety of popular items, and has resulted in a steady increase in profit margin over the past several years.

Seven Day Vending’s desire to accommodate its customers, bolstered by Apriva’s flexible support systems and Tucson’s climate and demographics, has proven appealing to market segments like nursing homes and car washes. “Before we install, we confer with location management to ask about their preferences,” Royer said. “We ask whether they want more dietetic selections, and some do. We then watch the sales.”

Since the drivers relay patron re-quests, the mix of products in machines conforms to the location’s clientele. For example, items like peanut M&M’s have proven extremely popular in nursing homes, and the operation’s willingness to tailor its menus is appreciated. The company gets many referrals from nursing-home staff members who change employers and remember the service they got from Seven Day Vending.

While traditional full-line vending sometimes is viewed as limited in variety and customer appeal, Royer observed that Apriva’s versatile set of tools can help operators correct this erroneous belief.

“And one thing I haven’t worried about is security,” he summed up. “With everything that’s going on with cybersecurity today, it’s a relief not to have to think about my role in it. I know that Apriva is my silent bodyguard, taking care of it.”