Unattended payment terminals have been among the last to see action in the U.S. migration to EMV, partly because their average low ticket values aren’t a big magnet for card fraud and operators are reluctant to plow money into new hardware in a low-margin business.

A portion of unattended terminals are making the leap directly to Near Field Communication-based mobile payments to bypass card-insertion entirely.

But many parking meters and kiosks still require card acceptance, and Scottsdale, Ariz.-based Apriva said it’s reached a milestone in unattended terminal chip-migration this month, with the first completed EMV certification in the niche in the U.S. to date. 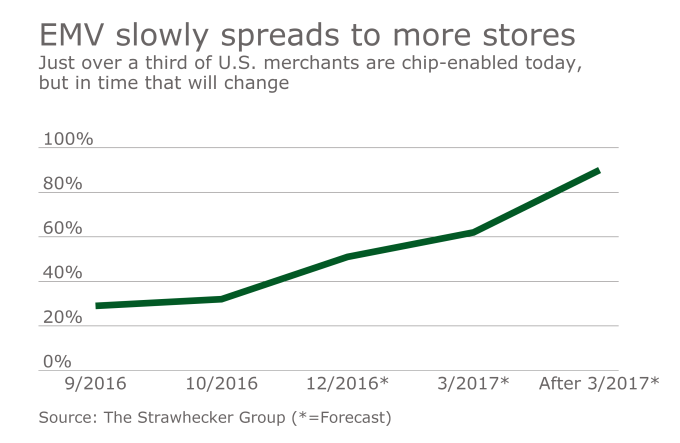 “Unattended terminals have lagged far behind the payments industry in addressing EMV, because many merchants were weighing the cost-benefit analysis of whether they wanted to buy new hardware or just live with the occasional $5 or $10 chargeback,” Riddiford said. “But we’re starting to see a shift now, where more merchants are making the decision to upgrade to EMV so transactions will be secure. In the long run, they expect to see lower overall payment acceptance costs via EMV.”

Momentum is still slow but in 2017, Riddiford expects to see more municipalities and universities that rely on unattended payment terminals for parking, vending and kiosks shift to EMV.

Overall Apriva expects to see rising demand for unattended terminals and other self-service payment concepts over the next five years with rising demand for cash-free transactions. Riddiford also sees future growth in the emergence of cashier-free checkouts like Amazon Go and the Internet of Things.

“It’s not happening overnight, but we’re excited about the growth possibilities we see in the future as more unattended and self-service checkout concepts take hold in retail and restaurants, he said.